It’s curious when travelling in inclement weather how people blame a service provider for not providing the service as it should have been provided. I’ve travelled predominantly between Australia, New Zealand and Canada, arriving in the latter two at the start of winter. This is a time that is notorious for volatile weather and is prone to delays, cancellations and alternative means of transport.

I have fallen asleep on a plane in Vancouver, starting the last leg of my journey to Kelowna (this was after a flight from Sydney) and woke up thinking that we had landed. After all, it is a 45 minute flight from Vancouver to Kelowna and could be excused for making the assumption I had missed the whole flight. Alas, we hadn’t moved. There was a blizzard of sorts (yes, in Vancouver) that had dropped approximately a foot of snow on the tarmac and the airport staff were hard pressed to clear it to get flights moving.

Vancouver can be a busy airport and I was astounded at the blame a portioned to the airline for this. No flights were moving, from any airline, however, there were some that seemed to think it was all Air Canada’s fault. I wondered if they had looked outside and saw that ALL the planes at the airport were grounded. ‘I’ll never fly Air Canada again’, some harped on. ‘Worst airline in the world’, this line lost credibility, though, when they admitted they hadn’t flown with any other airline. Sure, I must admit that it was a less than desirable experience, but it wouldn’t have mattered which airline you flew, whether it be West Jet or United, even Yukon Air was grounded. And maybe it wouldn’t have mattered which airline they were on, they still would’ve said ‘I’ll never fly with this airline, again’. We did start to taxi though after 4 hours of stagnancy. Just starting to move seemed like we were on the final descent, the home straight. It was only a 45 minute flight, after all. 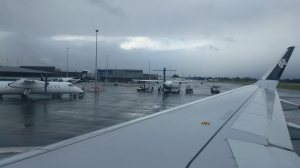 Christchurch Airport before take off.

And if the weather prevails, however, either at the commencement of the journey or at the destination, an airline may use alternatives to air travel. Buses, or Coaches, are used if it isn’t too far, however, a 45min-1hr flight could turn in to a 5-6 hour bus ride. Again, not ideal, but better than sitting around waiting for the weather to pass. Most people, when travelling for whatever reason Need To Be Somewhere and sometimes it’s best to keep moving, regardless of how slowly.

And when the road closes due to snow and ice, you may be put up for the night in the nearest accommodation. And some times the closest accommodation is further than anyone would like. Driving by bus two thirds of the way to your destination, to then be told the closest accommodation is back where you started, leaves the driver of said bus the unenviable task of bravely dispelling potential mutiny by some, which is made easier by the good humour from others. The driver then keeps his professional cool, focusing on the humour and drives his passengers safely through the torrential rain. And it was Rather Good to have a hot buffet dinner and a couple of drinks at the bar of the hotel that put us up at the last minute for the night.

These inconveniences are compounded, though, by tight travel schedules. Missing Thanksgiving with the family or missing two to three days of that once in a life time trip to Queenstown at the opposite end of the planet are important enough to be frustrated about. So is the potential of missing out on signing up for employment. I did miss out on a dentist appointment, though, but that won’t get me much sympathy, more a shared sense of relief than anything. It’s merely delaying the inevitable. Which is my point I suppose, the destination will still be there when you get there, it’s just the experience of the journey that changes. And the views from the plane the day after were worth the redundant bus ride!