Spring has definitely sprung in Queenstown, NZ. The snow on the ski fields through August held up quite well, considering the 3 and a half weeks of Sunshine and Blue skies. Everyone has almost forgotten what a cloud is, there have been so few of them. And, the air was super crisp.

Now September is here, and the last 2 days have warmed up noticeably. Although the snow was quite firm this morning, by the afternoon it was soft, but not too soft. And yes, it is that time of season when there is that perfect 1-2 hour window of opportunity in the late morning, when it’s in between the firm morning and super-slushy afternoon.

At the start of the season the snow on the beginners area was negligible. Now there is at least 6 feet of snow and it’s still above the carpet. In previous years around this time, this snow has already been started to be pushed to other areas that need it more. So, there’s still plenty of snow to be skied, especially if it firms up each night. (Or re-freezes, which ever way you look at it!) The groomers in the morning are delicious and the off-piste snow is sweet corned goodness. 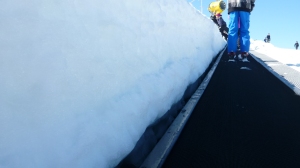 This is a great time to get out in the sun and enjoy the wind-down at the end of the season. Most of the multi-week, local kids programmes have finished and the mountains are open for skiing. Because there are so few people on the slopes, it’s a great time to learn how to ski & board, and if you’re good at one (or, at least like to think so!) it’s good to cross-over and try the other. 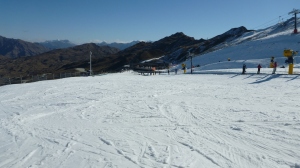 As you can see, there are very few people out there, meaning, for group lessons at least, it’s highly likely that you’ll get a private lesson for the price of a group and if you connect with the instructor, they’ll be available for a private, if you request them. So, you’d better get in quick, snow and weather conditions like this don’t last forever!!