The first post of the season is a little overdue, but it’s here now. It’s been an interesting start to the season. When we flew in on the 22nd, May, we flew through a blizzard. The Remarkables and the Southern Alps were covered in snow, Coronet Peak opened on time and it looked to be a very promising start to the season. However, rain and constant warm temperatures slowly but surely reduced the snow pack, leaving the lower mountain and beginner areas bare. 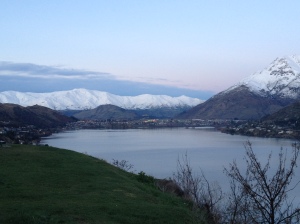 Coronet Peak remained closed for two and a half weeks, from the 22nd June through to 9th July, re-opening just in time for the NZ School Holidays. During this time I was on the Trainers Cert workshop at Cardrona for the first few days, then worked across the valley at the Remarkables, which was nice for a change of view. I have worked there before on an ad hoc basis at the end of the season a couple of years ago. 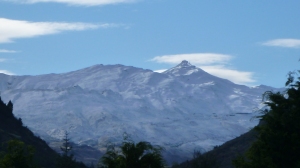 The Coronet Express started spinning at 8:00 am on Saturday morning, 9th July for First Tracks pass holders, with the other lifts operating into the evening, including the beginner conveyors and the Meadows chair, providing access to the Big Easy.

The Greengates chair continued to run for sightseeing and tubing from 10:00 am – 3:00 pm, giving the chance to soak up stunning views from the Ice Bar.

Night Ski also kicked off for the season on Saturday from 4:00 pm and from all accounts it was an awesome night with the airbag on the deck, a DJ spinning tunes and warm braziers burning.

Unfortunately, we have no control over the weather, but, this should be the start of a Colder Low pressure weather system that has a few cold fronts and southerly winds later in the week. Hopefully, winter is here to stay!

1 thought on “Winter has arrived, again!”